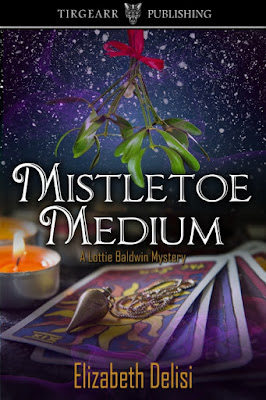 MISTLETOE MEDIUM, #3 in the Lottie Baldwin Mystery series, is now available at a special price: $.99! So now's the time to get your copy at a bargain price. http://tirgearrpublishing.com/authors/Delisi_Elizabeth/mistletoe-medium.htm

No sooner does psychic Lottie Baldwin pull up stakes and move to Cheyenne, North Dakota, than she finds herself up to her neck in a series of mysterious robberies. Can Lottie and the handsome new man in her life, deputy sheriff Harlan Erikson, solve the crime spree before Lottie becomes the next victim?

Lottie Baldwin glanced in her rearview mirror and frowned. Why hadn’t her tarot cards foreseen this? Red flashing lights reflected from the revolving dome atop a sheriff’s car, trailing directly behind her. After driving four hundred miles, the final hundred with the afternoon sun glaring in her eyes, the last thing she needed was a speeding ticket. She eased off the accelerator and pulled into the breakdown lane of the small, two-lane highway.

The sheriff’s car stopped behind her and a tall, muscular man in a black uniform got out. Lottie watched him in the mirror, absentmindedly patting her tousled blond curls into place, fascinated by the lithe way he moved. She’d never been interested in the law-and-order type, but this man might be the one who could change her mind. She opened her window, letting in the unseasonably mild early-December air.

He leaned down and removed his sunglasses. “May I see your license and registration, please?”

“Of course, Sheriff,” Lottie said, smiling briefly to bring her dimples into view as she read his badge—Lake County, North Dakota Sheriff’s Department. He was even more gorgeous up close, with dark blue eyes and broad shoulders that strained the top buttons of his shirt. The setting sun tinged his blond hair coppery-gold, and a light breeze brought the subtle scent of his spicy aftershave to her nostrils. His proximity made her light-headed. “What’s the problem? Was I speeding?” she asked innocently as she rummaged in the bottom of her purse for her driver’s license.

“You were going sixty-eight in a fifty-five zone, ma’am,” he said, accepting her license and registration.

“I’m sorry, Sheriff. I’ve been on the road since six this morning. I guess I was anxious for the trip to be over.” She smiled again, more intimately this time.

“Not anymore.” She shook her head. “I’m moving to Cheyenne and I’m so sorry to make such a poor first impression on the local law enforcement. Can we start over?” She extended her hand.

The officer studied her for a minute then grasped her hand in his. “Pleased to meet you, ma’am. My name is Harlan Erikson. I’m a deputy sheriff here and, as lovely as you are, I’m afraid I’m going to have to write you a ticket.”

As their hands touched, tingles shot up Lottie’s arm. Lovely, was she? The man had good taste! “You just do what you have to do,” she purred. “I respect a man who does his job.” She made no move to withdraw her hand, letting it lie trustingly in his.